I’ve finally got Spamocalypse to a prototype stage for the AI. There’s no artwork yet, some basic sounds recorded using this speech synthesiser, and the player can’t attack. However, the enemies are able to move around and respond to the player’s sounds and their line of sight checks are dependent on how bright the player’s position is. And after fixing a bug in the navigation mesh I built, their pathfinding will actually consider straight lines in all 8 directions around them, as long as they don’t have a clear line to their destination.

There’s still a few problems. Firstly, the AI don’t attack the player at point-blank range – in fact, they can’t even see the player at that range. I think it’s a problem with the models for their line-of-sight area, or perhaps their positioning. I also had to limit the number of times they speak, as they ended up talking over each other in a horrible gibbering mess. Finally, when they follow a path back to a patrol point, it sometimes glitches out once they reach it, and they just stand there doing nothing. Well, they are functionally zombies, which aren’t known for their intelligence…but enough excuses. It’s glitchy, and I need to fix it.

Here’s an image of the prototype so far. In the final product, the colliders for the detection systems won’t be visible, and neither shall the details about the spammers, but they should give an overview of what’s happening for now. 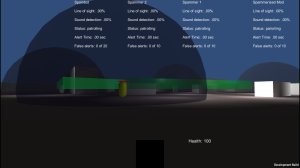 I’ve uploaded the binary folder to Dropbox. The initial one is for Windows only, and it’s a standalone build – this is due to my own navigation system relying on serialisation, and I only have my laptop to develop and test. However, I’ll add a Mac version later, and if you give this version a try, let me know what you think. I’ve added a Mac version, so if there’s any errors in that, let me know.

I'm a software engineer who's currently based in Galway. I write scifi in my spare time. View all posts by aceade

This site uses Akismet to reduce spam. Learn how your comment data is processed.