Something that popped into my head on Friday while I was in a pub saying goodbye to some former colleagues: some of my art might make good posters.

Here’s one that I had printed on canvas a few months ago, with some LEDs behind it on the wall of my home office.

The other three are a single panel of my St Patrick’s Day comic, a terror bird lancer, and a recent image of Draugr relaxing in their local hot springs.

I hate the night. Nothing good comes out of it. Brigands, wolves, bears, you name it. There’s a reason nobody back in the foothills of my homeland goes out at night unless they need to. And it’s not the local vampires; they’ll extract a price for it, but they’ll at least guide a farmer home safely.

Down here in the Sydfjords, worse things come out of it.

END_OF_DOCUMENT_TOKEN_TO_BE_REPLACED

I will not tell where I was born – let the fact that it was a surface village of the League be enough. As a citizen of the League, I sat through the endless classes on being a good citizen. We were taught that everyone must pull their weight in the League for the common good. To Leave No Feartollán Behind. I went to Mass like everyone else. I attended the Civil Defence training sessions, even as my parents struggled to pay the levies and tithes to support the militias. I planned to become a nurse.

None of it made the slightest difference. One of Connacht Trading’s security guardsmen accused me of being a thief and a Fomorian sympathiser, and everybody I knew turned a blind eye as he removed me from my home without a trial. Just like that.

END_OF_DOCUMENT_TOKEN_TO_BE_REPLACED

Just like the station, the inside of the house was far brighter and warmer than the outside. The walls were a shade of white that, while plain, complemented the warm orange glow of the oil lamps. To her right, a narrow and slightly crooked staircase ran up to the next floor, disappearing underneath a grey shaft of light from a window or skylight. The opposite side of the corridor led down to a pair of doors, one of which was ajar and emitted a warm, vaguely fishy smell.

None of that mattered right now. Tara’s attention was taken up entirely by the large and extremely hairy dog trotting down the stairs with far more speed than the thick, corded hair in front of its eyes should have permitted. It must have been a dog, for it bore the general four-legged shape of one, and the deep bark that emanated from underneath the white corded hair reminded her of a boarhound that one of her father’s business partners owned. But the sheer size of it put her on edge; that thing’s shoulders were just a few centimetres below her elbows, even before it reared up and planted it’s paws on von Clief’s shoulders!

END_OF_DOCUMENT_TOKEN_TO_BE_REPLACED 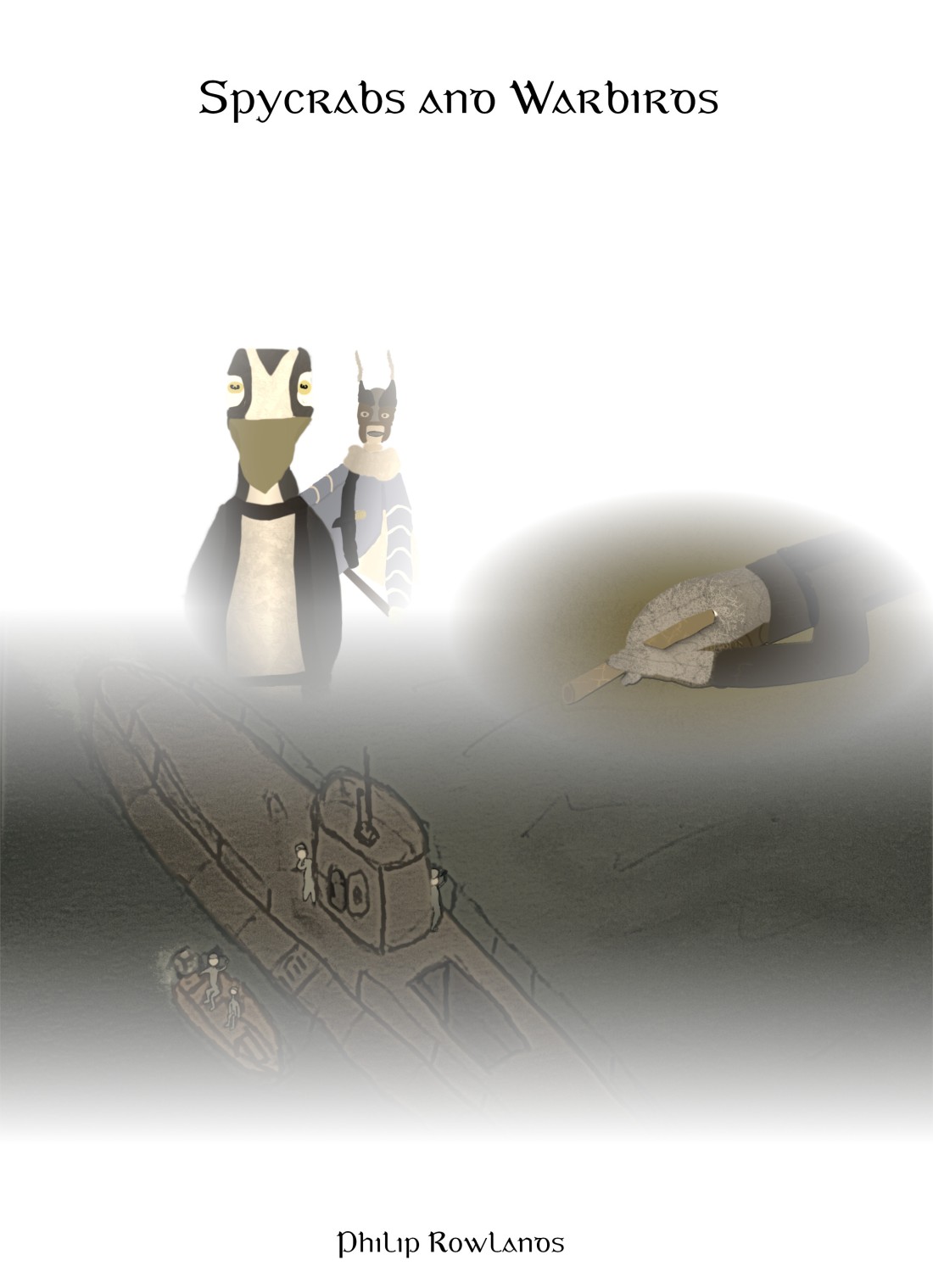 Above is the cover for my next collection, focussing on the containment efforts around the Connacht Disaster Zone and other countries’ efforts to exploit it. I haven’t settled on the release date yet, but as usual, it will be available from BuyMeACoffee (pay what you want).

I am of the Brotherhood, and I don’t care who hears it. I’m told you think we’re bandits. That we live just to steal babies and…turn them into us. Make them stronger.

END_OF_DOCUMENT_TOKEN_TO_BE_REPLACED

The view from the train window did not appeal to Tara. Grim, grey rocks sandwiched between a grey sea and sky. Squat stone sheds, warehouses and factories lined the far side of the harbour. Behind them, faded red huts or shacks that looked as though they could barely hold up to a stiff breeze lined the walls of the canyon – the fjord, she reminded herself. And above it all was the smell of fish and salt.

As the train slowed to a halt next to the main station building, her impressions of the town did not improve any further. The exposed wooden platform had long since lost any colour to the elements, and the faded white paint of the station looked like somebody had simply given up on maintaining it. About two thirds of the station windows had been shuttered, and the rest were too grimy to be fit for purpose.

She wrinkled her nose when she climbed down from the carriage as the smell of fish grew even more potent. Behind her, Seema remarked that it smelled like somebody had been painting with fish guts. But there was no time to comment on this, for the wind pierced their clothes as they left the shelter of the train and walked the five metres to the station doors. She could have sworn that a haphazard pile of crates creaked ominously as she passed it.

END_OF_DOCUMENT_TOKEN_TO_BE_REPLACED

Well, after my first holiday to Dublin in a few years – almost three years to the day – I came down with Covid. After managing to dodge the dreaded lurgy for over two years, I finally got it. Yay.

I had got the secondary site uploaded before that, and managed to get it mostly working. So, you can find the backup on GitHub Pages here. There are some caveats:

I could probably put Vue on my CV now, if I think frontend development might be worth going back to. I’m still not sure about that.

Work has been sapping my will to do anything after hours due to the intense frustration of getting SNMP to just bloody work. SNMP stands for “Simple Network Management Protocol”, and it seems to be used for things like managing embedded systems or sending alerts when something goes wrong. The problem is that it’s based on top of UDP (User Datagram Protocol), which unlike TCP (Transmission Control Protocol, or what most applications like browsers or email clients are ultimately built upon), doesn’t attempt to be reliable. This means that, depending on the protocol version and what alert/notification type you send, there might not be any sign that it went wrong!

I never thought I’d say this, but I think I might prefer frontend development – making the parts of web apps that everyone can see and thus complain about the most if it isn’t “visually compelling” or “not pop enough” – if only because I can actually see when it goes wrong! So, to try and force myself to learn a JavaScript framework for my CV…I’m going to build a mirror site for Connacht Disaster Zone.